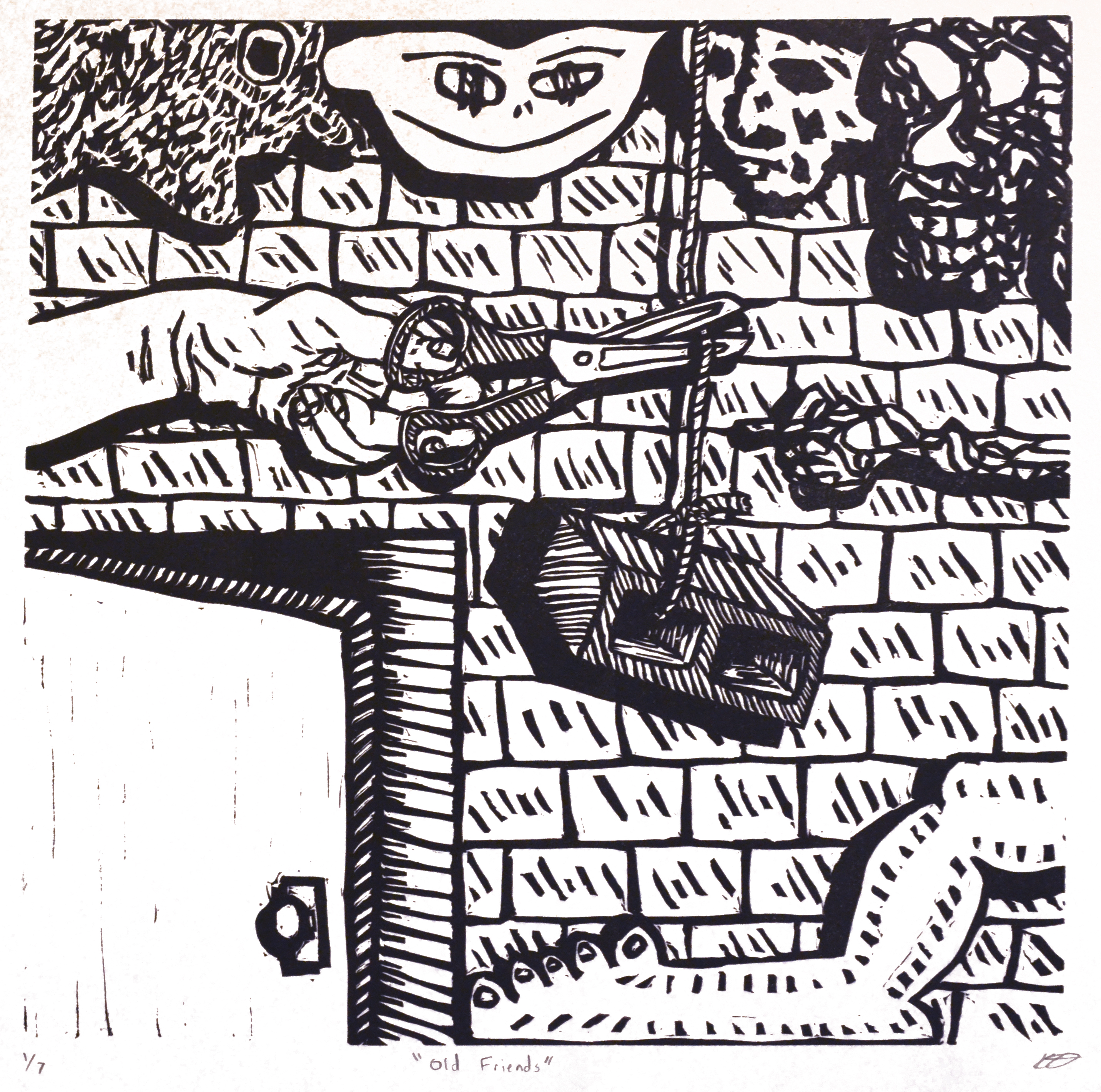 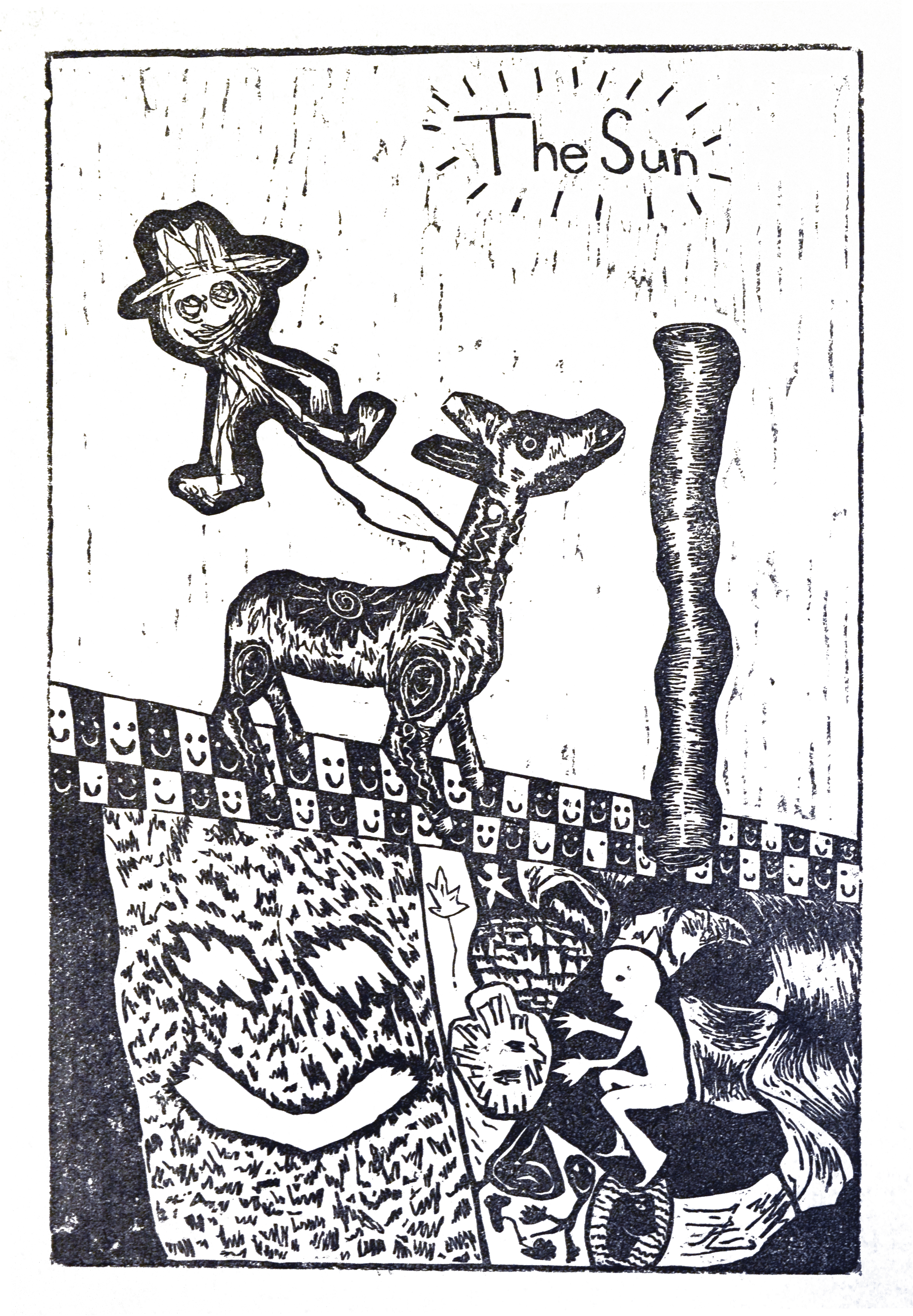 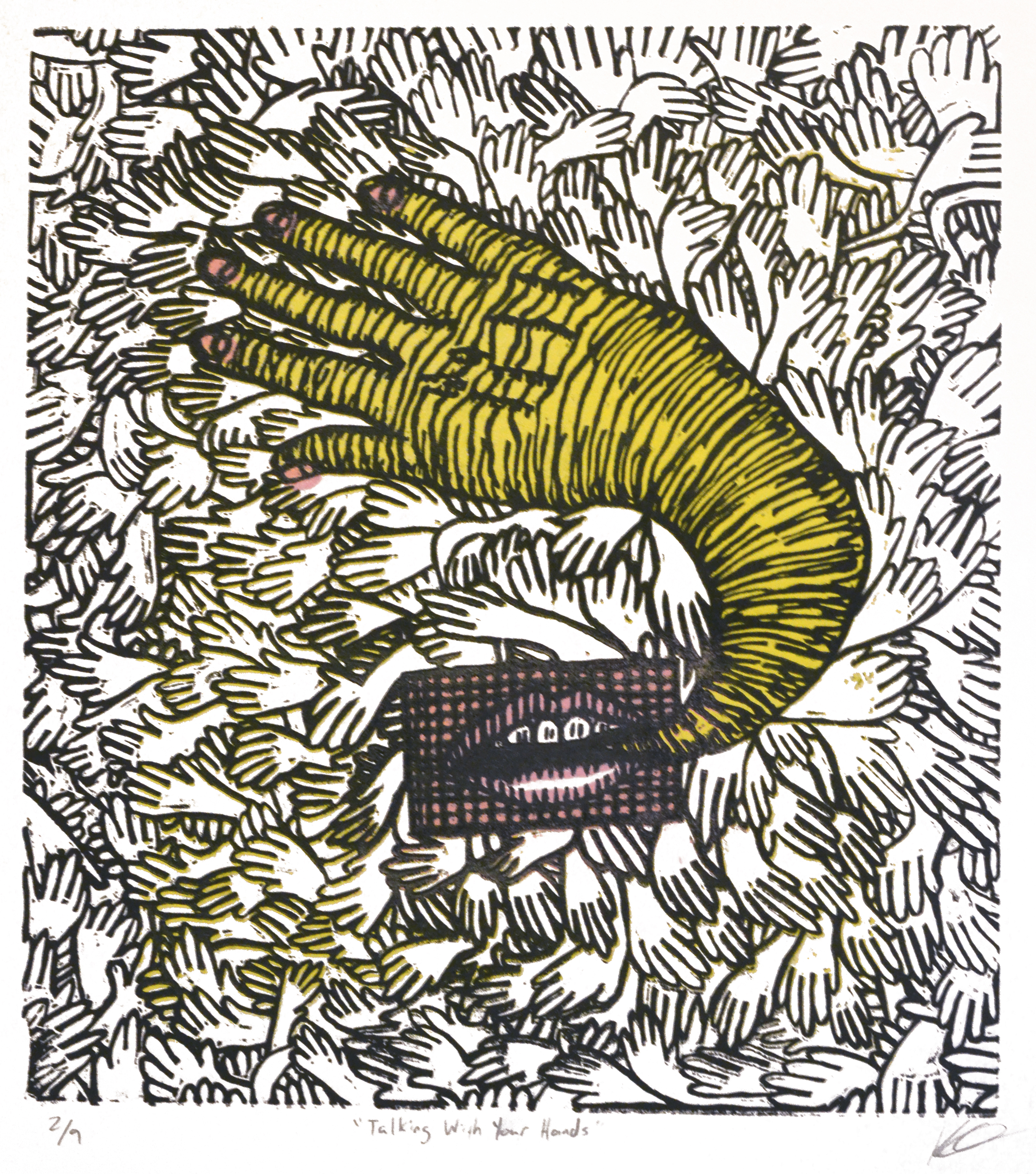 "Talking With Your Hands" Woodcut 2016

Kenny DeMoss makes works of a variety of media such as printmaking, painting, collage, sound, video, etc. His work deals with equally varying topics such as absurdity, consent, and many others through the vehicles of imagined characters, cartoons, textures, appropriated images/sounds, organic and electronic instrumentation, and numerous other techniques. Kenny recieved his BA in Art from the University of Southern Indiana (2015). He has been a participant in both SGCI and MAPC featured portfolios, as well as an organizer of multiple solo and group shows at PG in Evansville, IN.

Myself and a group of many other printmakers exhibited work in the portfolio "You! Me! Them!", which was exhibited at the 2016 MAPC Biennial Conference at IU Southeast in New Albany, IN.

The portfolio "Repair, Repurpose, Reuse: Outwitting Planned Obsolescence" featuring myself and 23 other printmakers was featured in and exhibition at the Catapult Creative House in Cape Girardeau, MO.

This event was a group showing featuring space themed work by myself and other members of The Arts Council Of Doom at Angel Mounds in Newburgh, IN.

Myself and 23 other artists were featured in the portfolio "Repair, Repurpose, Reuse: Outwitting Planned Obsolescence" that was organized by Brett Anderson, rofessor of Printmaking at the University of Southern Indiana. The portfolio was shown during the conference at the Oregon College of Art and Craft.

Printed was a group printmaking show featuring artists from the tri-state area, located at PG Gallery in Evansville, IN. For this event I organized, curated, hung, and featured works of my own in this exhibit which showed for one month.

This event was an installation piece created by myself and a small group of other students, under the guidance of Dr. Hilary Braysmith, over the course of the 4 weeks leading up to it. The piece consisted of 3 rooms that were created using a variety of media, as an attempt to give a house that had been condemned by the city a final moment of beauty before it was destroyed.

Myself and a small group of fellow students, under the guidance of Dr. Hilary Braysmith, organized an event for the installation of two public works in the downtown area of Evansville, IN. The event included art vending, live music, games, and a myriad of other forms entertainment.

This event was a juried group exhibit that was shown in the Mac-Pace Gallery at the University of Southern Indiana, in which I featured three printmaking works.

This event was a juried group exhibition that was shwon in the Mac-Pace Gallery at the University of Southern Indiana, in which I featured two printmaking works.